On Monday evening, at Portsmouth City Hall I was proclaimed the 12th Poet Laureate of the city. Below is the transcript of the remarks I made after I was introduced by Erine Leigh, the tenth laureate. I had introduced her at the same podium four years earlier. None of the customary photos were taken so I can just share these that I took at home. 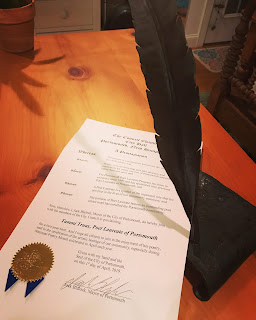 When I noted the date I was asked to come here, I did a little research … and found that some of the earliest references to April Fool’s Day were made by poets.

In 1508, French poet Eloy d'Amerval referred to a poisson d’avril (April fool, literally "Fish of April").
In 1539, Flemish poet Eduard de Dene wrote something about a nobleman who sent his servants on foolish errands on April 1.

I thought that was interesting. And I stand before you tonight as happy as a fool to become keeper of the quill, and I accept this honor with the joy of a jester. - And may I put it on the official record that I also learned that in Europe, where the April Fool’s day tradition originated, it is customary that all pranks must end by noon, so … as the children I work with would say “No take backs!!”

Please don’t take my levity or my brevity tonight to mean that I will not take the role seriously. I will take it quite seriously. There have been ideas percolating in my mind for years about how I might fulfill this role were it ever to be bestowed on me. I look forward to working with the PPLP board, with city officials who have been so supportive for so long, and the entire community on bringing some of those ideas to fruition, to a poetic journey. I want to take us to places we’ve not yet been. And in accepting this laureateship I know I have miles to go before I sleep.

While I acknowledge, with gratitude, every poet and board member who has served over the last twenty-two years, all the way back to Nancy and Paula and Esther, I am not willing to say I will stand on the shoulders of anybody.

I would prefer that we link arms, and walk together, all of us, and see where it takes us ….

I’d like, also, to acknowledge people going back a bit further. In closing I will leave you with a poem, but not one of my own. This is poem of the Abenaki-Passamoquddy people, the first poets to live on and love this land that we call Portsmouth, and I dedicate it to all of the poetic voices of this town; past, present, and future.
Date and translator unknown.