Yesterday I gave a brief talk about Ona Judge Staines, the subject of my novel, for a group of mostly young people who had never heard of her. That is why I wrote the book in the first place - I wanted to make sure her story was never forgotten. While I thoroughly enjoy sharing the details of Ona's life, I think my favorite part of the talk was when we had a moment of silence in her honor. Yesterday was the 169th anniversary of her death.
Yesterday felt like Ona's day. For some reason, I kept thinking about a piece of art created by Karen Battles that is also a tribute to Ona. Maybe because like me Karen is a creative artist who wanted to tell Ona's story through her art. I saw it when it was on display in Portsmouth a few months ago. It, like Ona's story, has stayed with me from the first. Though I have no money to spend on art right now, I contacted Karen and asked her if it was for sale.
Yesterday the sun shone so big and bright, but made it too warm for the month of February. It was like a gift one knows she does not really deserve, but accepts, with both guilt and gratitude.
Here is a pic I took of the art; 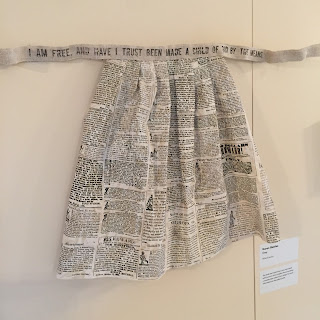