Check out this vimeo poem!

I was honored to receive the Esther Buffler Poetry-In-Schools Fellowship from the Portsmouth (NH) Poet Laureate Program for 2015. I worked with four classes at the high school working with English teacher Ms. Laura LaVallee.
At my first visit I introduced the students to Esther's work, and some of my own. I then shared a selection of digital poems. Again the work of others and one of my own. We did a brief writing exercise and talked about how the poems we were reading together could be digitized to spark their creative thinking. I left them with the challenge of creating an original digital poem using a poem of their own or another that they identified with. They were given complete creative freedom to craft digital poems using any applications and resources they liked working with cell phones and /or computers. They were told they could work individually or collaborate. I wanted the experience to be as open-ended as possible so as not to limit the possibilities.
A couple of weeks later I returned, and just as the school year was drawing to a close, we held an "open mic" event where the students shared their creations. As I had anticipated there was a wide variety of work. As I had hoped the students were pushed a bit out of their comfort zones, and in many cases, had tried something new. All had to take a good hard look at a poem and think about the many ways it could be interpreted and what it meant to them. The most popular poem selected was Robert Frost's The Road Not Taken. Some of the digital poems were funny and some were serious. Some were personal and some were not. Success was achievable for every student, and some took an opportunity to soar. A few of the students said the assignment was frustrating, but many said they enjoyed trying it. Ms. LaVallee and I have already begun discussion of what we could do to improve the learning experience if we were to do it again. 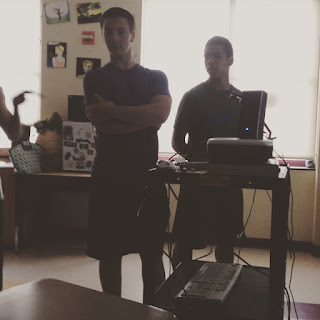 I would like to thank the PPLP, Ms. LaVallee, and all of her students for the opportunity and for their poems, and I share below the work created by one of the students with her permission. It is titled South and Sagamore, Gravestones.