Today on what would have been her 85th birthday I pen a tribute post to Grace Paley. A Jewish girl from the Bronx, Grace lived out her later years in Vermont.

Shortly before her death in 2007 I had an opportunity to study with her at a New Hampshire workshop, but because of family obligations I didn't. I have not, and I'm sure I never will, stopped regretting that. Regrets torment me sometimes. Writing of them relieves the torment. Sometimes.

So I embrace her words, the gorgeous, relivable legacy of a writer. Her prose and her poetry, but more often her advice. This is a favorite;

“The best training is to read and write, no matter what. Don’t live with a lover or roommate who doesn’t respect your work. Don’t lie, buy time, borrow to buy time. Write what will stop your breath if you don’t write.”

Though we suffered the loss of her, I am glad that she was spared living through recent events in our country which I think would have pained her deeply, as evidenced by the following quote given when she was asked of the world that she hoped her grandchildren would live in;

"It would be a world without militarism and racism and greed – and where women don't have to fight for their place in the world."

We can do better. We can bring more Grace to the way we live. 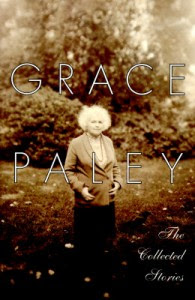 Still, we must not give up. As evidenced by these words she also left for us;

"Let us go forth with fear and courage and rage to save the world."

And here in a 1992 interview Grace talks about her writing;