Here is something I wrote recently following one of my weekends in NYC. This was originally published by Seacoast Media Group (Dec. 2014). I also took all of these photos.

Vanity Fair called it “… a perfect little black cocktail dress of a show…”, and I highly recommend it too. Now through February first there is an exhibit at The Metropolitan Museum of Art’s Anna Wintour Costume Center which I recently visited, and knew many of you would be interested in it. The exhibit is called Death Becomes Her: A Century of Mourning Attire.

This exhibit really is a striking artistic as well as cultural display. The detail and darkness of the garments are contrasted starkly by the white mannequins wearing white wigs in the all-white gallery. White curtains and panels add a quiet and slightly sacred softness to the large open space. There are about thirty ensembles for men, women and children on display, along with accessories, quotes, fashion plates and historical photographs.

The history of mourning attire is fascinating as alluringly alluded to in this quote from the exhibit’s curator Harold Koda, “The predominantly black palette of mourning dramatizes the evolution of period silhouettes and the increasing absorption of fashion ideals into this most codified of etiquettes. … The veiled widow could elicit sympathy as well as predatory male advances. As a woman of sexual experience without marital constraints, she was often imagined as a potential threat to the social order.”

While the wearing of black garments when in mourning dates back to ancient times, this exhibit covers only a century of the tradition spanning the years from 1815 to 1915. That century, though was a period of time when mourning fashion, as a part of grief expression, became very serious in our nation in large part due to the overwhelming loss of life in the Civil War. While across the pond all time champion mourner and fashion trend setter, Queen Victoria, donned an all-black ensemble upon the death of her husband Albert in 1859, which she would continue to do every day until her own death forty-two years later. 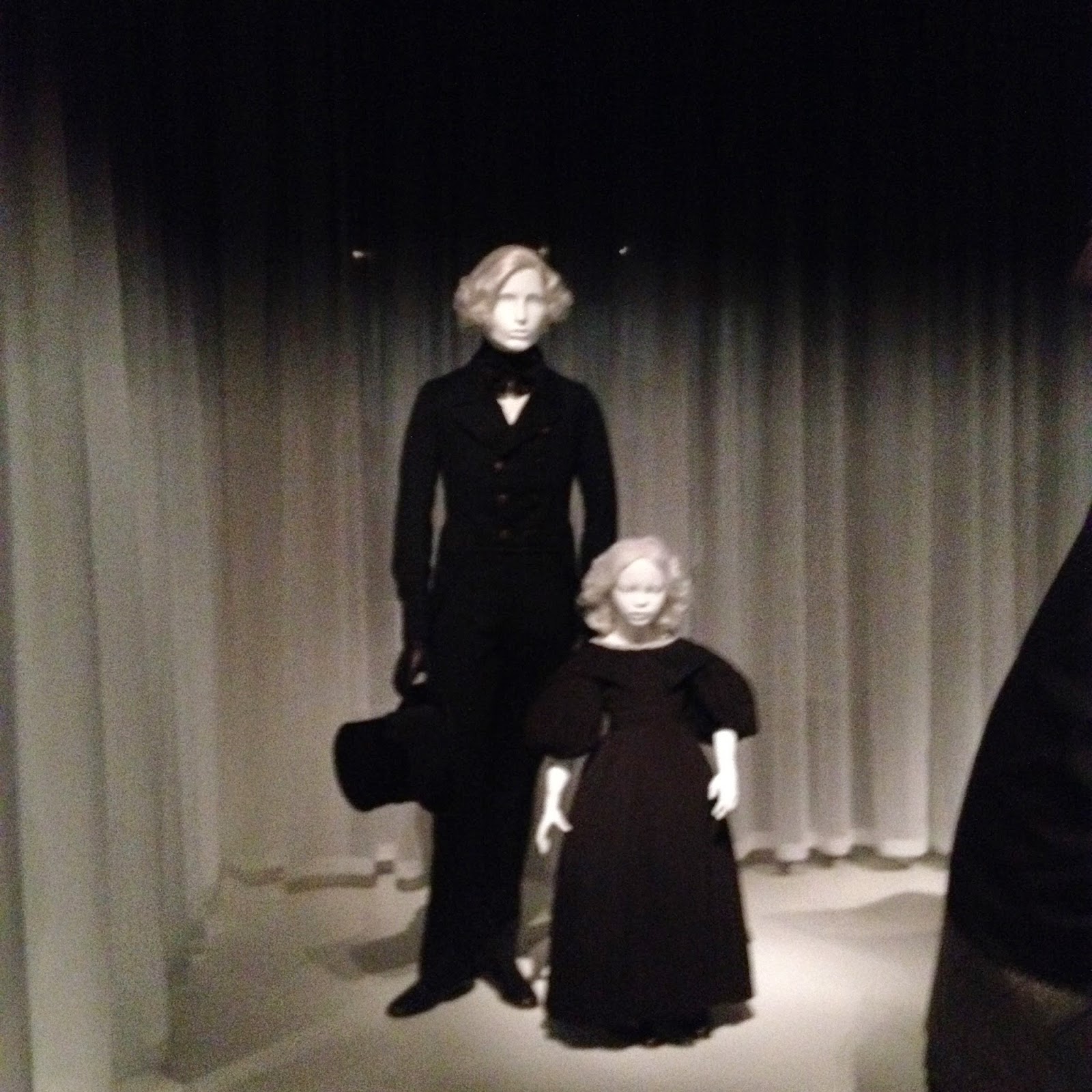 The more common cultural requirement for wearing black during that century was two years. These demands were focused on the female, but men had some requirements to follow too. As evidenced by the elaborately designed ensembles in the exhibit this must have been more than just an emotional drain on the bereaved, but also a financial one. A considerable amount of money had to be set aside to have a mourning wardrobe made, which of course, many war widows could ill afford to do. Poor people would often resort to dyeing their clothes black so as not to defy convention. There were stages of mourning dress as well; “full mourning” was followed in due time by “half mourning” when a woman could begin to introduce one or two other colors into her black outfits as long as they were not bright or light. Shades of gray were considered safe. 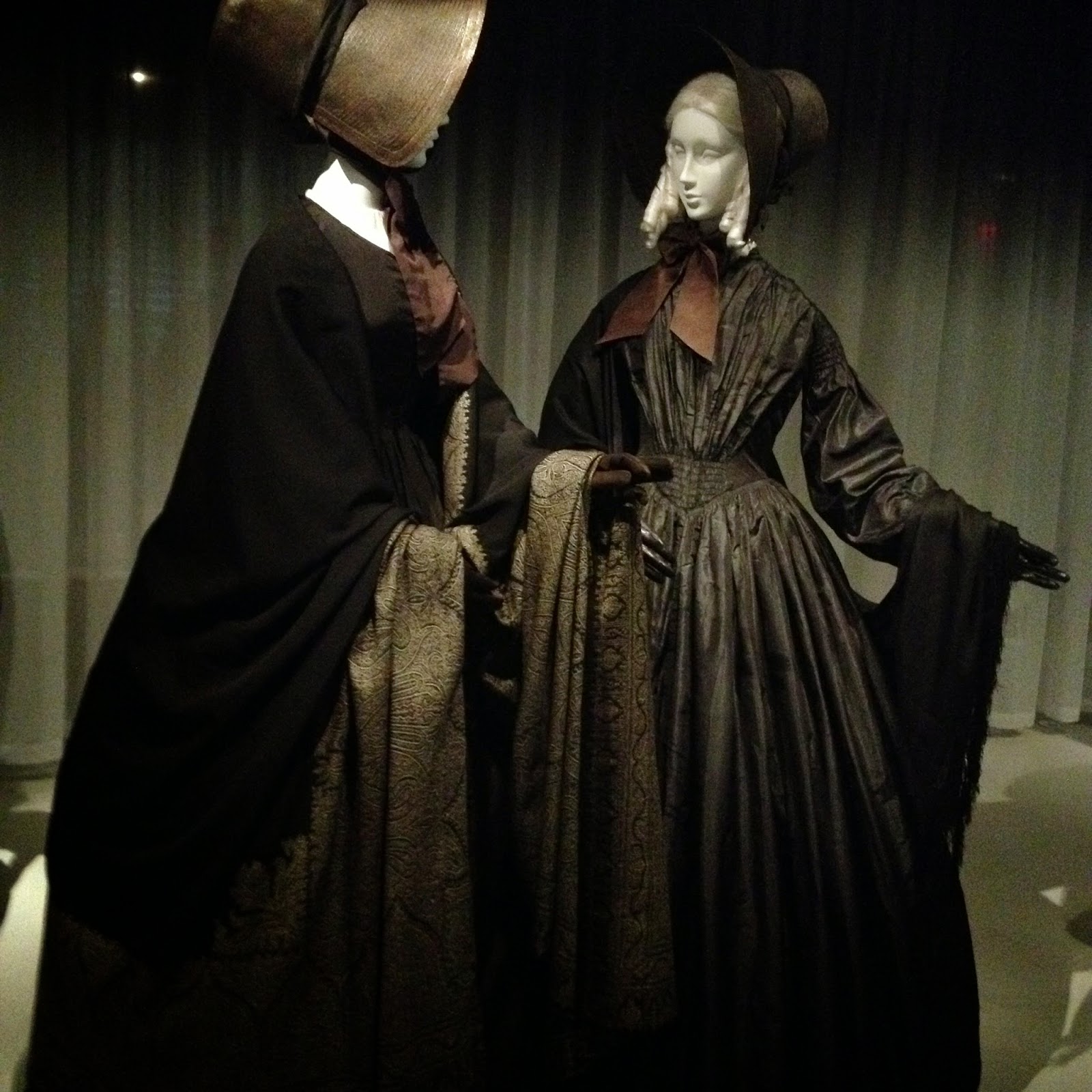 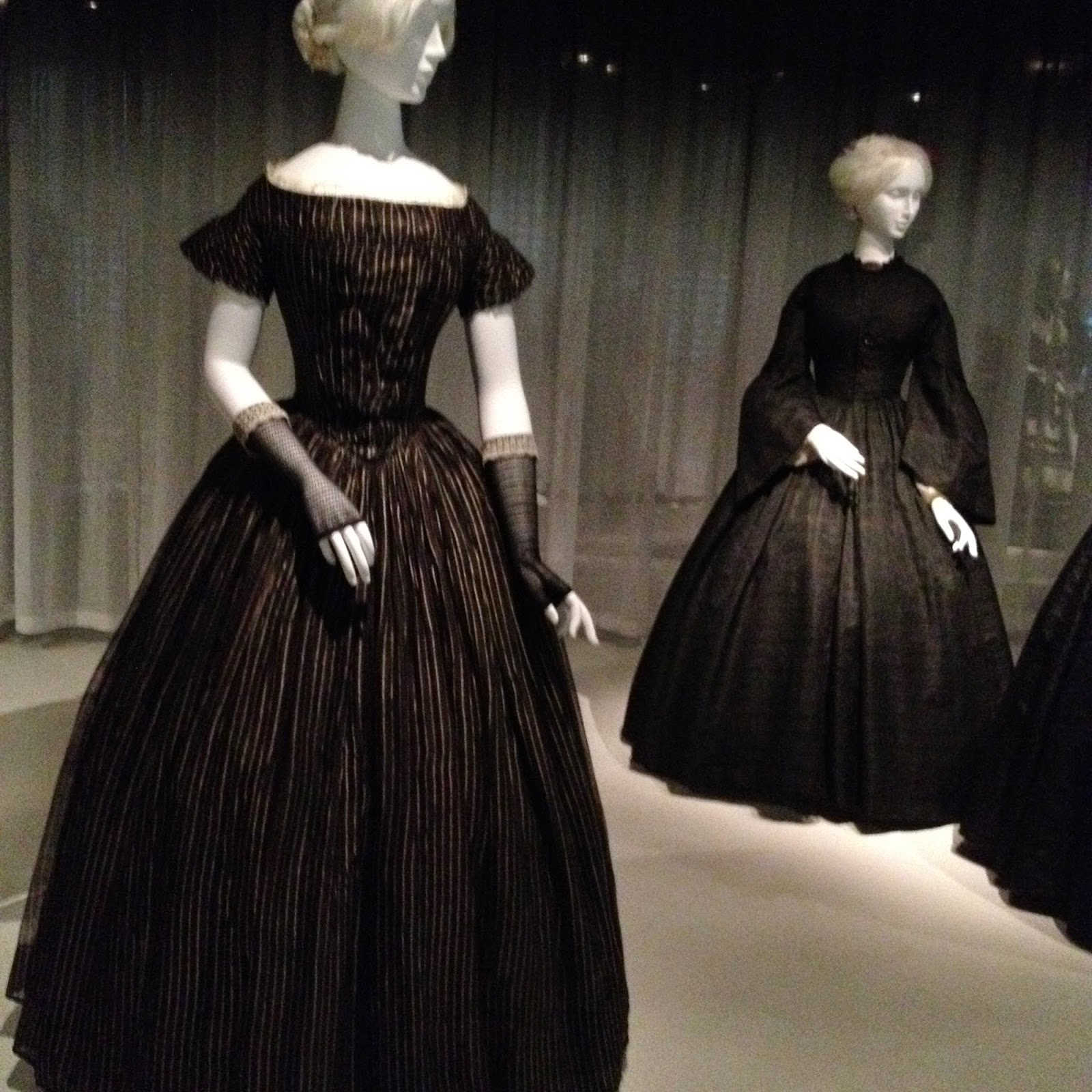 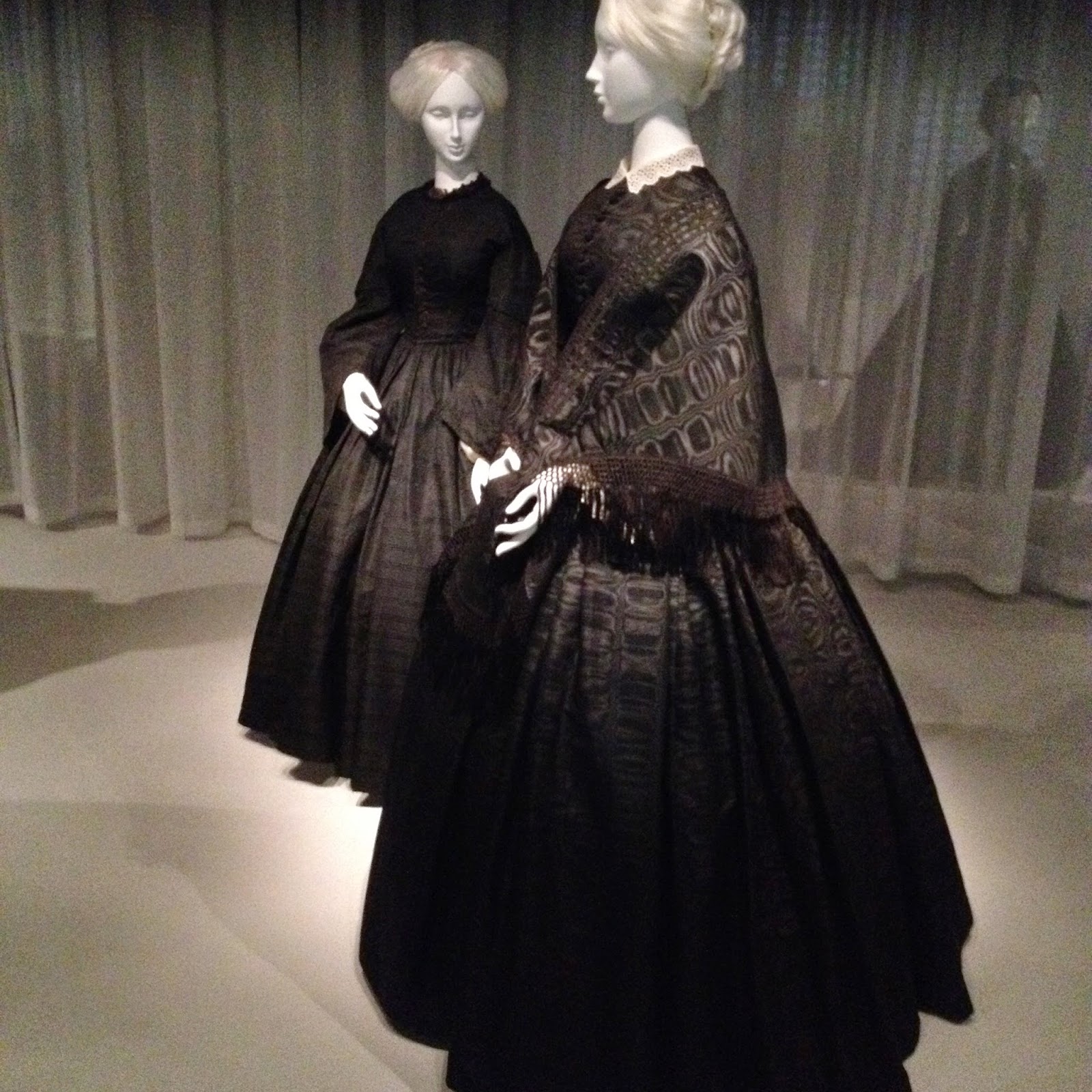 After the death of her son First Lady Mary Todd Lincoln was once reported to be wearing “deep black”, the meaning of which seems inexplicable, but helps us to understand how society judged the person by what she was wearing. There were even expectations on the fabrics that should be chosen, with a preference for dull, not shiny ones, such as crape. 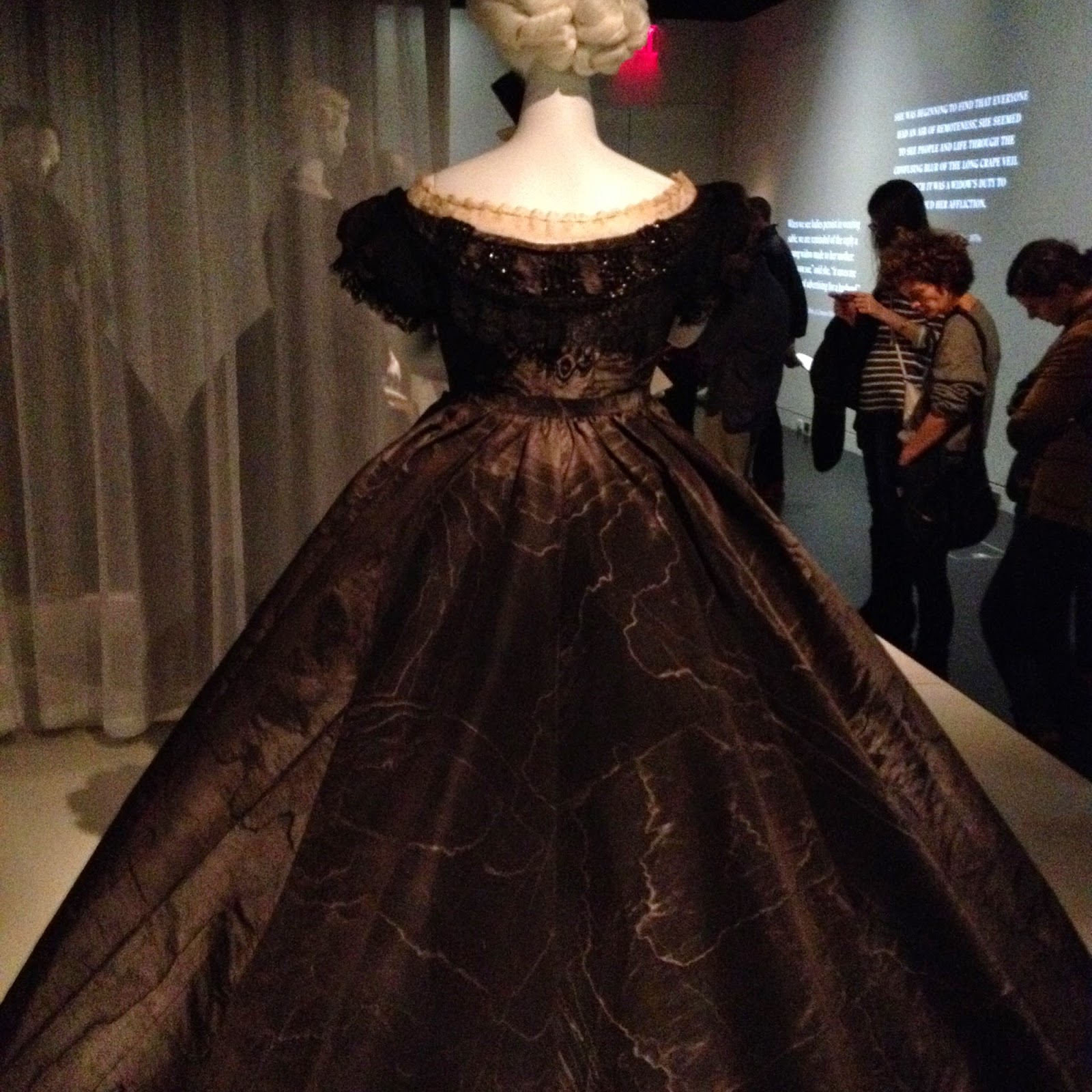 I had always assumed that a widow’s black clothing communicated only that she was still grieving for the loss of a loved one. I was surprised to learn that these costumes were also used to communicate her availability for remarriage, and that suitors and busybodies could interpret when she could be remarried based on the stage of dress. Veils, generally only worn when leaving the home, had another variety of meanings for the onlooker to interpret. 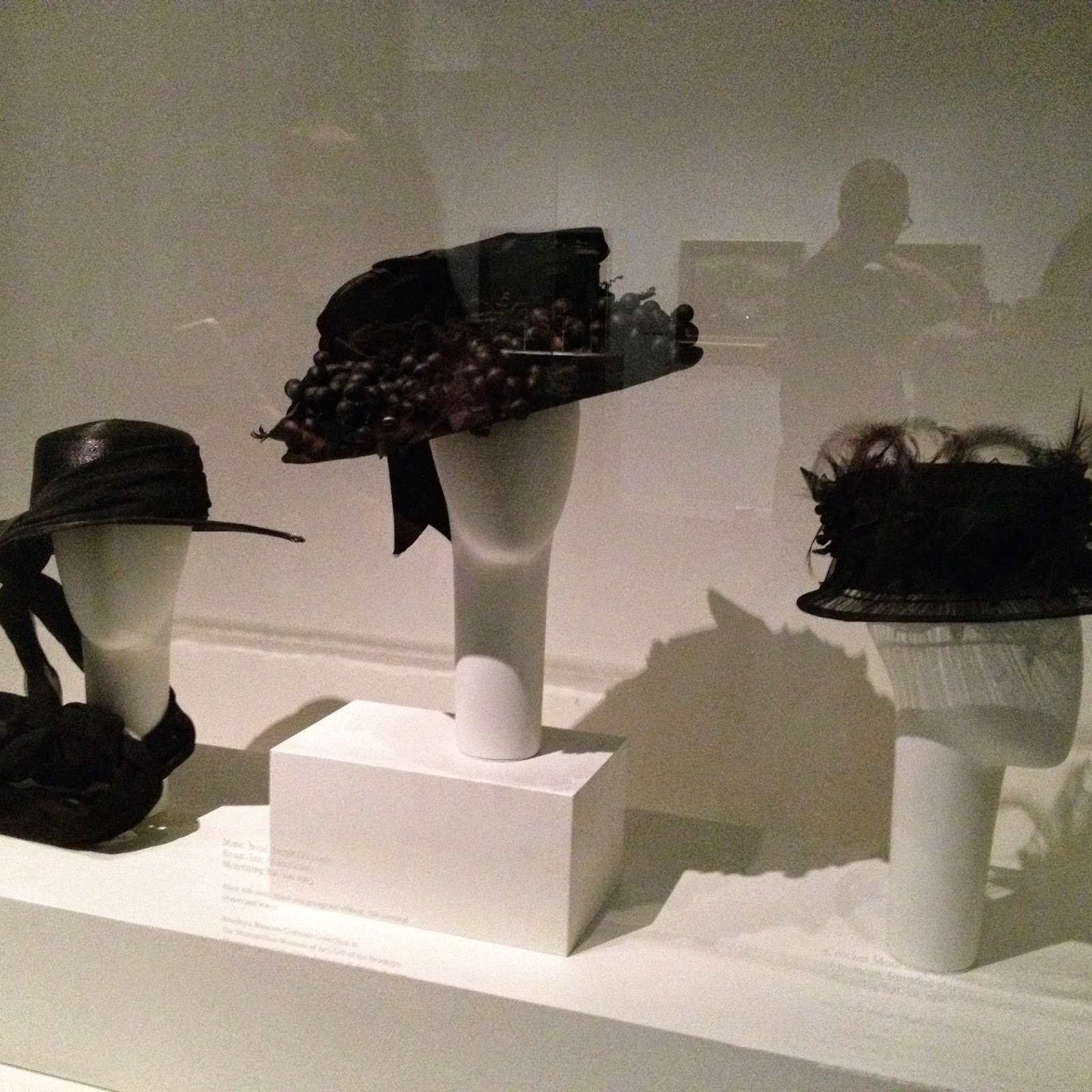 While I am greatly relieved that such harsh expectations have been eased, I do find the study of them interesting. Unlike most museum exhibits, this one has a little something for just about everyone. Death Becomes Her is an enthralling look at our past that will be of interest to both fashion and history enthusiasts, as well as all ilk of Goth folks and ghost hunters. The exhibit can be seen seven days a week at the museum’s 1000 Fifth Avenue location in New York City which charges pay-what-you-can admission.