I have been blogging for years now, and have made it a point not to use my blog for bitching. Who wants to read a rant? But every once in a great while, you've got to give in to the inner whiner, and let it rip. I'm terribly sorry that during this week of gratitude that I'm going to do just that. Maybe by the end of my post I'll see more clearly a way to feel thankful about this state of affairs.
So ~ in what I thought would be a very exciting week for me I have just released the first (self-published) chap book I have ever created. It isn't my work, but a re-release of Henry Longfellow's poem called Lady Wentworth which tells the tale of something that happened in my hometown of Portsmouth, New Hampshire long ago. It has been a labor of love really. Love for Longfellow and his poem and my hometown and the whimsical work of a local artist, and I have been working on it for at least eight years, determined to find a way to make it happen.
I had set the retail price for the little book at $15. That was as low as I could go and stand any hope to break even for just the production costs. By production costs I mean only the cost of printing the book. No pay for me or the illustrator, who worked very hard too, and created just for the book fifteen original drawings. Actually, now that I know what cut the bookstores are getting, it is clear I will probably never see the black.
As you surely know, this is not an unusual situation in the struggle to get books into the hands of readers. Still, it was suggested to me yesterday, that the price of $15. was too high for the product. Suggested by someone who knows books well. As much as I'd like to lower it, I simply can't.
I left that bookstore and walked over to a nearby coffee shop needing a post-yoga class smoothie badly. The coffee shop walls were adorned with the work of a visual artist as they always are, and as I usually do I took a few minutes to check out the featured artist's work.
While I liked the simple oil paintings very much, what I couldn't help but notice, in my freshly dejected mood, was that the artist was asking $180. for small paintings. What's the deal?
Sure, I realize each work of art is (usually) one-of-a-kind, but the argument still stands. Why as a society do we undervalue the creation of printed works to the degree that we do? We are willing to pay several dollars for a cup of coffee and a couple of hundred dollars for a small work of art by an emerging artist. We are willing to pay a couple of hundred dollars to see a concert or sporting event. The socks I wanted to buy my daughter for Christmas cost $34. per pair. Socks. I just don't understand why something that two artists, (three if you count Longfellow), worked hard on, that was costly to create, that will be of limited production, and is something that will entertain and endure, be so undervalued?
Well, ... still I am grateful that I am able to bring the poem back to Portsmouth, that was always my goal. And I am grateful that Bob Nilson (a fully emerged artist) agreed to work with me on the project. Below, as a teaser, I share one of his drawings from the book which makes the poem so entertaining for all ages. And below that a link to purchase the eBook version, which of course is much less expensive. Happy Thanksgiving. 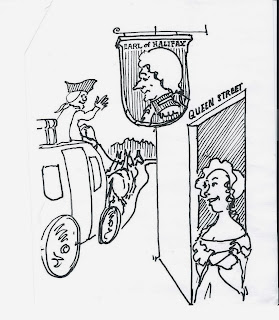