Last night I participated in two back-to-back book discussion groups that were a fascinating example of the tried-and-true teachers' assignment of comparing and contrasting two pieces of literature. It was interesting to me, even a little exhilarating, (I'm a geek) that this was all coincidental.
The first of the two was a book discussion group that I led. It took place at the living history museum where I work and was part of a series I curated on local black history. The book was Our Nig, or Sketches from the Life of a Free Black, In A Two-Story White House, North. Showing That Slavery's Shadows Fall Even There, by Harriet E. Wilson (published in 1859). This book is a fusion of genres, primarily the slave narrative and the sentimental novel popular at the time. It is particularly important to the history of American literature as it was the first novel ever published on this continent by an African American.
Sadly, it has been proven to be autobiographical as well. It is even more important that NH historians be familiar with the story as it is another first person account of the black experience in our state which has, I think since Harriet's life time, been largely ignored. The title brilliantly tells the story in just two syllables.

Because Harriet's story took place about 65 miles inland I had challenged my co-workers to see if they could identify any connections she may have had to Portsmouth, the harbor town where we interpret history for visitors.
I had identified three possibilities which we discussed;
1. Harriet's / Frado's mates went to sea and never returned. A man living in Milford, New Hampshire who went to sea may very well have done so from our neighborhood.
2. An obituary for Harriet's real biological mother, Mag Smith, has been identified, and it says she was formerly of Portsmouth, a pretty clear indication of Harriet having ties to this town.
3. There is considerable evidence that Harriet was an itinerant peddler of her hair care products as well as her book, and I propose that it is quite likely that she passed through here on her travels. One extant first edition of Our Nig was from a Hampton, NH home indicating she may have come that close.

Even if one did not have an interest in NH history Harriet's story is a compelling and riveting read.

After my group finished our discussion I joined a group at my local indie book store for a discussion of Passing by Nella Larson (published in 1929, seventy years after Our Nig) which just happened to be happening on the same night.The subject matter of this novel is obvious, and it is the story of two women's experiences, and of the color line at the time. It too is a riveting read, and a wonderful snapshot of American history. 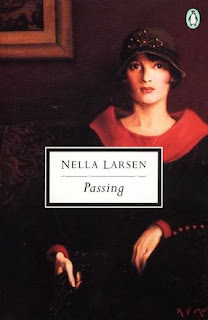 Both of these books are sometimes referred to as stories of the "tragic mulatto" and sometimes dismissed as such. It is an important consideration to keep in mind, but it would be grossly unjust to dismiss these books along with white abolitionist literature that was contrived to proselytize to a white readership. Both of the writers were biracial women, and Larsen in particular, was first and foremost, an artist working with words. Although some other masterpieces of American literature have been categorized as tragic mulatto tales to include Their Eyes Were Watching God and To Kill A Mockingbird so the canon is indisputably well loaded.
One striking similarity I noted between the two novels was that both of the female protagonists were referred to as Nig. (Larsen could not have known about the other novel which was still lost then.) In the first case it was a diminutive word meant to reference one's property, as in "This is our house and our dog and our nig," without sentimentality of any kind. And an ingenious slam on a society that considered(s) itself above the institution of slavery.
In the second book it was a diminutive nickname given to a mixed-race woman by her husband in reference to her darkening skin. A joke shared between them, but meant to be insulting just the same.
Now I wonder if there will be another novel produced by a writer in this century that will  reference a woman as nig, and while I hope that it will not be so, my hope is as superficial as the color of my skin.
I am excited that I'm  next reading and discussing another work with a strong local connection, that has also been classified as a tragic mulatto tale, though like Our Nig, is based on a true story. It is Lost Boundaries by William L. White. A fellow reader let me borrow a copy of the book and the DVD, a movie made locally that I have been wanting to see for years, so I'm going to pop some corn now...