I am a bit surprised that my little literary hamlet doesn't celebrate Bloomsday. I think we should, and just might take it upon myself to do something about that for next year. For today it will have to suffice to blog about Bloomsday.
Bloomsday is a special celebration of just one day, June 16th. Specifically June, 16, 1904, the day James Joyce wrote about in his novel Ulysses. The celebration started in Dublin but has gone global, and most cities celebrate it with readings and meetings and lots of good Guinness. It really is a remarkable work well worth celebrating year after year, because it takes years to discover all of the little jewels Joyce has hidden for us in it's pages. It works best as a group effort I think. It takes a village to read Ulysses.
Here is the Wiki synopsis;
Ulysses chronicles the passage of Leopold Bloom through Dublin during an ordinary day, 16 June 1904 (the day of Joyce's first date with his future wife, Nora Barnacle). The title alludes to Odysseus (Latinised into Ulysses), the hero of Homer's Odyssey, and establishes a series of parallels between characters and events in Homer's poem and Joyce's novel (e.g., the correspondences between Leopold Bloom and Odysseus, Molly Bloom and Penelope, and Stephen Dedalus and Telemachus). Joyce fans worldwide now celebrate 16 June as Bloomsday.
Ulysses contains approximately 265,000 words from a lexicon of 30,030 words (including proper names, plurals and various verb tenses), divided into eighteen episodes. Since publication, the book attracted controversy and scrutiny, ranging from early obscenity trials to protracted textual "Joyce Wars." Ulysses' stream-of-consciousness technique, careful structuring, and experimental prose—full of puns, parodies, and allusions, as well as its rich characterisations and broad humour, made the book a highly regarded novel in the Modernist pantheon. In 1999, the Modern Library ranked Ulysses first on its list of the 100 best English-language novels of the 20th century 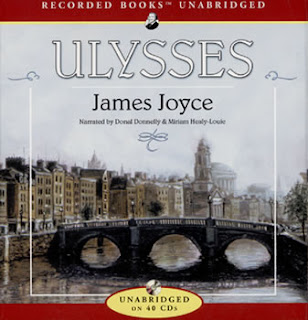