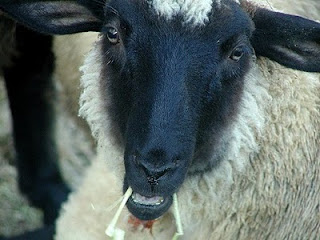 Just got my report card for the graduate class in Narrating Illness that I recently completed. Feeling very disappointed and sheepish. Got a B+. Since it came with no explanation I'm going to go with the idea that I didn't get an A because of imperfect attendance. It can't be because my writing was imperfect, right?!?
Having a very rough week here working on my house and preparing for kid graduations so have gotten very little writing related work done. Further sheepishness.


Animal metaphors, based on animal behavior, are common in many languages. Here are some from English:

That was kind of 'catty' of you.
The problem has been dogging us all week.
Don't be cowed by his bullying.
The stock market has ended its bullish streak, and is now going into bear mode.
(And note the various metaphors and extended metaphors in this headline:) 'Investors, mauled by bear market, come clawing after their brokers.'
Stop horsing around; we've got work to do.
I really don't have patience for any monkey business.
Stop badgering me; you've been bugging me all day about that.
After that faux pas, he acted really kind of sheepish.
He didn't want to tell me, but I ferreted it out.
He's been beavering away all week on his little project.
She's so mousy, I hardly realized she was in the room.
He ratted on her and now her goose is cooked.
Posted by Tameri T. at 1:26 PM