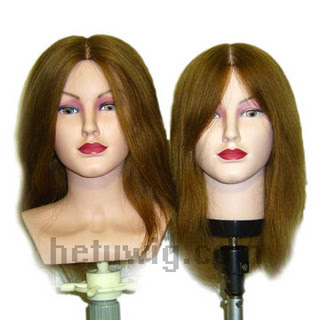 Just got home from the local beauty school. Because I'm broke, because I'm a free lance writer, I needed to go to the Friday noon blowout for two bucks special. I was sitting in the twirly chair for awhile before I noticed someone was staring at me. I've been having trouble sleeping for, well, three years, so sometimes it appears that I am awake when really I'm not. So there I was, pretending to be awake in the twirly chair while getting my hair untwirled, when the staring face right in front of me came into focus. It was a little scary as I took it in. Kind of Avatary, with reptilian eyes and ears, on her perfect ivory skin topped with a layered mane of brunette hair. We stared each other down awhile, then I looked around and  noticed that I was pretty much the only client in the place. Well, the only human client that is. There were these plastic heads all over the place, business was in fact booming for plastic heads. I had never noticed this before. The room was filled with young women, well girls really, not much older than my own daughter who will soon come sidling home from the eighth grade. They were all similarly coiffed including the one named Amber working on my real head. They all had colored hair cut relatively short and at asymmetrical lengths. The colors were not the attempts toward inconspicuous "naturalness" that is my own strategy, quite the contrary. They all had some sort of stripes in their hair, jaggedless zebraness. Except for one who had black hair tinted blue that looked just like the handsome male superheroes in the comic books of my childhood used to have. Funny it didn't seem comical on them. I watched them working with their heads, which each had. I think that the end of Friday afternoon must be work on your plastic head time at the  beauty school. The one staring at me, perhaps because her human was attending to me instead of her, wore a label on her neck indicating that she is known as YXT53648. It worked well with the Avatar thing she had going on, but made me wonder if the girls named their heads. I would think it would be irresistible to name your head. If I had a head I would name it. I watched them work with a growing fascination. One was shampooing her head, sort of straddling it in a way that you could only if your client doesn't have a body so I wondered about the efficacy of that lesson. The girl with blue-black hair was giving her head a mohawk and another was giving hers a do of fat spikes that I'm sure has a name I'm unaware of. I figured they were gearing up for prom season which is just about upon us. I don't think the wedding season is going to be demanding euro-hardcore-punk hair styles. A supervisor came to inspect another girls completed work on her plastic head. They discussed the results very softly and briefly, and the girl took her head away. I turned my attention back to YXT53648 who was still staring me down. Though I usually appreciate life, I've been kind of depressed lately. (I tend to be quite optimistic. Many wise and pessimistic people have told me so. Ask Shayne Kevin.) Today though, my tired toward depressed self started thinking about how much better the plastic head woman had it than me. She was so pretty with her lizard like features. Her eyebrows were perfect, as was her skin. Without any pores she didn't have to deal with all of the magazines and cosmetic aisles, and well, mirrors, telling her that her pores are too visible. She could age without aging, a cool trick. She had permanently colored eyelids, cheeks and lips, and her lips were tiny little pert things that probably didn't have to yell at errant teenagers, or well, eat or breathe both of which I do fairly often. It goes without saying that her hair was lovingly tended, while mine is stuck with the occasional two dollar beauty school special. Even the stick body seemed enviable. The same estrogen attacks that have been robbing me of sleep for three years have also made me long and fight for a stick body. I would like a stick body more than I would like to forgo pores. She even had an interesting foot pedal at the bottom of her stick body to change her height at will. How damn handy would that be?! Just before I got up out of the chair to take my old flawed self home in time to meet the errant teenagers I looked around at all the pretty plastic heads, and reminded myself that the one thing I have never been able to tolerate is an empty headed chick.
Posted by Tameri T. at 3:03 PM