The thing with feathers

I've been hesitant to write this post, maybe because it is a little too personally revealing. I'm not sure.
First, I said I would expound on the discovery I made while listening to Dana Jennings talk last week. Not a big discovery, but something that surprised me quite a bit. Didn't see it coming at all.
Pretty much since I decided to get serious as a writer, I've been told that I have to declare a genre. Mostly by graduate schools, but one gets the question all of the time, even from other writers. Last week at Writer's Night Out, I was asked to write my genre on my name tag, and I couldn't do it. I put a big fat question mark there instead. This has been a problem for me for years now. I write across all of the genres, and I have no desire to change that. I really want to learn to be a better poet and fiction writer, not just one or the other. I've wrestled with this conondrum to a degree that would probably seem silly to most people.
But it was while listening to Dana talk about his work (he also does several kinds of writing) and how one finds their voice, that I realized that most of the writing that I do, what I seem to be a bit better at, is actually non-fiction. Don't know why it took me so long to figure that out. The vast majority of writing projects I have been drawn too, including blogging, are non-fiction or creative non-fiction, often with a historical angle of some kind. So, I'm thinking that is where my authentic voice must be. But I still want to become a good writer in general. I can not imagine ever abandoning poetry.
Yesterday, I had the good fortune of seeing a chataqua performance of Emily Dickinson at my local library. It was captivating. And I kept having strange feelings of affinity with Emily that had never occured to me before. Like Emily, I have been feeling more and more the need to withdraw and hunker down at home, where I can focus on my work to the greatest degree posssible. In examing her life and my own. I wonder ~ is this an ascent into a serious literary life, or a descent into middle age madness? Though she shunned personal interaction she wrote several letters a day to many different correspondents, and I chuckled at the correlation of that with my own FaceBook habit. The following is a list of quotes from Emily about her life, that reflect my very own feeings about mine, more than a century later.

~ This is freedom.
~ The perfected life.
~ How do people live without their thoughts?
~ Words are my dearest companion.
~  Home is my definition of God.
~ Publication is the auction of the mind of man.
~ We stagger under the wieght of grief.
~  ...  then the letting go. 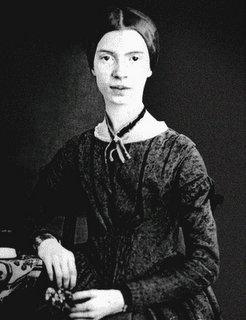 is the thing with feathers---

That perches in the soul—

And sings the tune without the words—

And never stops—at all—

And sore must be the storm—

That could abash the little Bird

That kept so many warm—

I've heard it in the chillest land—

And on the strangest Sea—

Yet, never, in Extremity,