On Becoming A Sankofa Scholar


So many happy and sad moments this week, enough to fill a year really. I'll just touch on a couple here, perhaps the most important.
My mentor died. That isn't as sad as it sounds. Hers was a long and well-lived life just a few days shy of 94 years, and I am sure she was ready to go. But the void she leaves behind is huge. As I've been looking back on our friendship, I realized that the last time I heard her read a poem it was one of mine. She had chosen one of the poems from my forthcoming book to share at the Portsmouth Poetry Hoot. Suddenly that seems so much more meaningful.
She was always a champion of my work, and her encouragement helped me find my voice. For some of us that is a hard-fought task. I may not have been able to do it without her. I remember many years ago when she invited me to join the Seacoast Writer's Circle, and how privileged I felt about getting that invitation.
She always read my column when I wrote for the local paper having worked in newspapers for many years herself. I knew if she praised something I had written I had done well. She was not one for false praise and any word of criticism was always kind and constructive. Both gifts of great consequence and I am so grateful for all of the gifts that she gave me.
There is still a voicemail on my phone from her. I just listened to it again. She recommends a book to me, tells me that my poems "stayed with her" and suggests that I throw a "publication party".

Pat and I are bookends in this photo (taken by Pavel Pyndrys) at a reading at Gibson's Bookstore in Concord, NH, 2014, for The Widows' Handbook: Poetic Reflections on Grief and Survival. 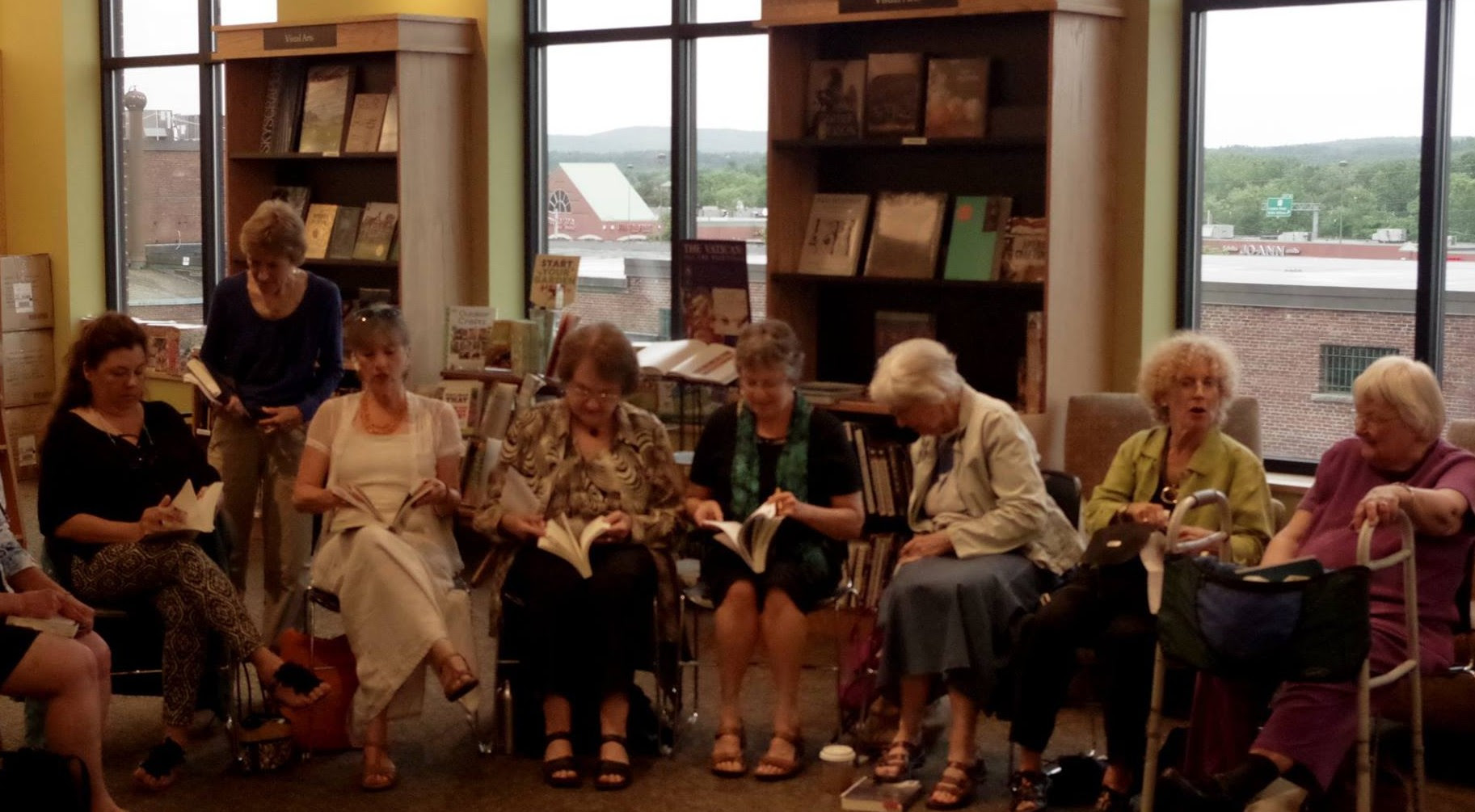 I found the note she wrote to me a few years ago when she read an early draft of my almost-finally-finished novel. Here is one paragraph:

"You may originally have intended to tell the story of the life of Ona Judge Staines, but the book meta-morphed into something much more significant and powerful. What you have done was take two major social issues from the late colonial period and the early years of the new nation - slavery and racism - and explore them as they impacted the lives of two very different but interconnected individuals - George Washington, the most esteemed American of his day, and Ona Judge Staines, the escaped Mount Vernon slave who lived her life in the shadows."

I do wish I had a chance to tell her about a recent high - That I have been named a Sankofa Scholar. I bet she would agree that is the best title ever! I was asked to write and start giving The Ona Judge Staines tour for the NH Black Heritage Trail in Portsmouth (May through October). I know she would have loved that news, and she likely didn't know that she was instrumental in me getting to this place.
I know too, she wouldn't want me to be sad at her passing. She would want me to get back to work. My very best work.
So off I go. Less one champion.