TBT - Quite a few Thursdays...

My dear second cousin Barb sent me an old photo (sixty-seven years old!) this week and I have been marveling at it. It features two people I never met. They are my great-grandparents.
I've been thinking a lot about them in this time of great turmoil in the country that they went to great lengths to call home. They, like so many of my ancestors, were immigrants.
She was Rose Ramos, born in Terceira Portugal. the "third" of the Azorian islands, known for lilacs and volcanoes. He was named Anthony Mederios, and is thought to have been from the same island though they didn't meet and marry until they were here. He came at the age of fourteen earning his passage by fueling the fire on the ship which landed him in Providence, Rhode Island. He arrived at the turn of the twentieth century. Soon after he felt the need to change his name to William Mowry. Not sure why he chose that particular name, but there is no need to wonder why he felt he had to take a new one. It is a milky white old English name few could take offense to. He worked two full-time jobs all of his adult life in factories. Rose stayed at home raising their children. They sent their sons back out on that ocean to fight for this country in World War II. 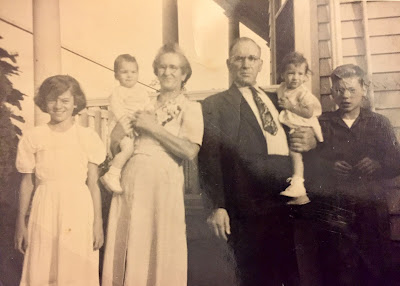 In the photo the couple is posing with their four grandchildren, each holding a baby. My great grandmother looks pleased and is wearing a corsage. I wondered at the occasion. My aunt Rosemary, the twelve-year-old girl pictured, remembers it as my great-grandparent's 50th anniversary over which the family made a big fuss. My great grandfather doesn't look happy, but proud and serious, and completely at ease holding a baby. The lad beside him is my father and this photo was taken close to his fifteenth birthday. That was the year he moved from Ohio to Rhode Island and was probably very unhappy. My aunt said, "Those were trying times for our little family."
They are all standing in front of the house that my father and his sister sold out of our family just recently. It was a three story walk up with enormous three bedroom apartments located on a corner lot in Pawtucket. My father was raised there from that summer on and my grandmother lived there from the year this photo was taken until her death in her nineties. It is the scene of many childhood memories for me, including quite a few thanksgiving dinners.
I wish I knew more about my great-grandparents. I wonder about the corsage. I wish I knew if he pinned it on her and what they might have said to each other when he did. I wonder about the jewelry; my great-grandparents are wearing none, while the baby is, and I wonder what my father is holding. I think I see a little star on a string, but am not sure. I wish I knew what was served at the celebration dinner that must have followed. I note that my great-grandparents are not turned toward each other even though the day was about them, but instead each is turned toward a grandchild, the future. I wish I knew what that grandfather might have said to his fifteen-year-old grandson that day, a boy given the name he had given up, Anthony. Maybe they listened to a ballgame on the radio that afternoon. Maybe President Truman addressed the 48 states about his Fair Deal Program. If he did I bet my great-grandparents were listening, and think my father probably was too.
I wonder what they would have thought about that boy growing up to vote for this anti-immigration president. I hope they can rest easy in what has come to be and in what is yet to be. That grandson is now the great-grandfather and two days ago was gifted his sixth great-grandchild, a beautiful baby girl. She carries their DNA in her tiny little body. The DNA that sailed here, alone, fueling fires real and imagined, with sweat and hope and trust, that the future would be good and safe for the babies that may come, in the years ahead, in the melting pot of milk and honey, the land of opportunity, a place they would have called the Estados Unidos da America. A sight from the island that my great-grandparents left behind.
Posted by Tameri T. at 8:48 AM