I wrote this article for The Portsmouth Herald's publication called Seacoast Seniors, which is not available online so I am posting it here for those who did not see the hard copy published earlier this week. It is reprinted with a few minor changes, and including a quote that didn't get into the magazine.

If you have been to Portsmouth, New Hampshire you've seen the massive tree that towers over the relatively massive Moffatt-Ladd Mansion. Her real name is Aesculus hippocastanum, commonly known as a horse-chestnut tree, and sometimes, a conker tree. There are several theories about why the horse-chestnut is so-named, too many to list here, and many of them sound plausible. While grown all over the temperate world for centuries the horse-chestnut seems to have been native to a small area in the Balkan forests of Eastern Europe. The motivation to carry the tree to other parts of the world was to spread beauty. The horse-chestnut is primarily an ornamental tree, and if you've seen ours even once, this you understand. It grows large, providing a gorgeous canopy, which in spring blooms in copious candle-like flowers. Other uses have been fully explored and are not significant. The wood isn't desirable for building, and the fruit (the conker which is not really a chestnut) is not edible (to some species it is toxic) unless processed, though that was done during the Great War in Europe. At times the conker has been used as an insect repellent in the home, and it is thought to have some medicinal properties that are still being studied today. The bark was used to make a yellow dye. Mostly though, the conker has been used for child’s play, the game of conkers having been very popular in the UK, did come to the US, and was taken so seriously that world championships were established.

The tree was most desired throughout time for the same reason that General Whipple brought it to Portsmouth; it looks lovely when mature, and lining an avenue. During the colonial years it seems to have been popular for stately men to plant stately trees outside their stately homes. Fancy trees were another way of displaying status. While often called a legend, and it is so amazing that it sounds like one, the story that museum docents tell at The Moffatt-Ladd House about the majestic horse-chestnut in the side yard is credible. It goes something like this;
Whipple and his enslaved manservant, Prince, were in Philadelphia for the signing of the Declaration of Independence. While there they may have collected a handful of horse-chestnuts, the fruit of a tree new to Philadelphia. More likely William acquired seeds, or even saplings, from John Bartram’s Garden. Bartram was a Quaker and a botanist and the garden he started in 1728 is the oldest surviving botanical garden on this continent, where three significant historical trees still grow. By the time of the revolution it had become a thriving nursery business that the founding father/farmers would have sought out.
Descendants recorded that Whipple planted the horse-chestnuts along the front of the house to commemorate the signing. It is more likely that one of the enslaved men living there did the dirty work. Quite possibly, Prince. Stolen as a boy from the gold coast of Africa, Prince was purchased by William Whipple upon his arrival at one of our eastern seaports. While still a teenager, Prince served beside his master in two battles in the American Revolution, and did ride with him to Philadelphia in 1776. In 1779 Prince would sign a petition of independence of his own, though it would not result in his freedom. There is no question when reading it that he had embraced the cause for which he had fought. Somewhere along the way the last surviving horse-chestnut was named The Liberty Tree. Arborists, who come to the Moffatt-Ladd House regularly to provide care and guidance, have verified her age, and she is on the National Register of Historic Trees. 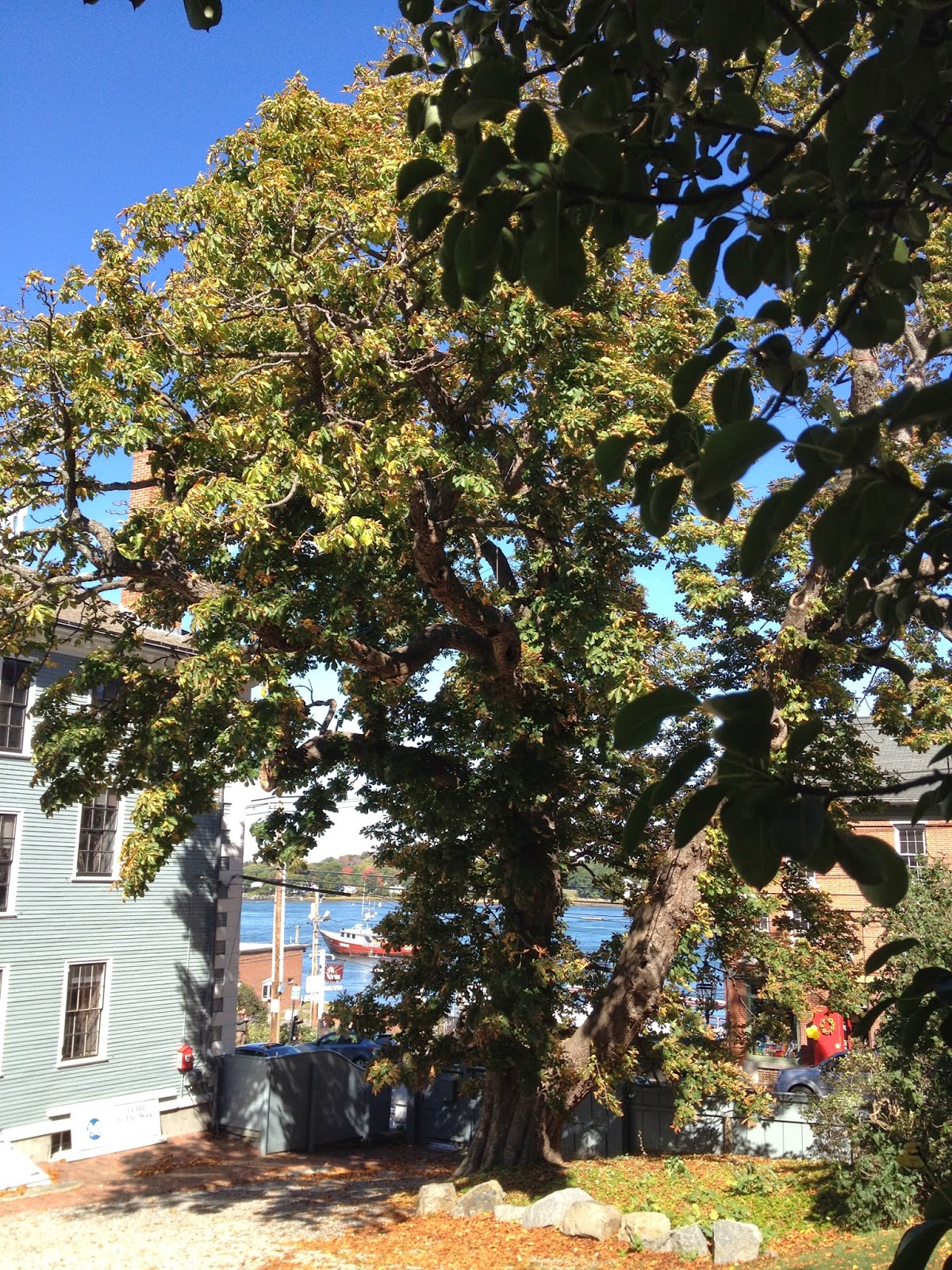 Until four years ago our Liberty Tree had a sister tree 3000 miles away in Amsterdam. She was known as the Anne Frank Tree and grew outside the secret annex. Anne mentions the horse-chestnut tree three times in her diary. By 1944 it was full grown, though considerably younger than ours having been planted around 1840. Having suffered fungal and insect damage, she was condemned to death. In an outcry familiar to many locals the townspeople flipped out, and a judge granted their tree a stay of execution. Of course, she couldn't really be saved and storm winds toppled her in 2010. Her offspring though, were sent off around the world. Eleven of her babies came to the US and, after a three year quarantine, have recently been planted. The closest to us was ceremoniously set into the Boston Common at the request of another teenage girl who thought the site most appropriate and somewhat coincidentally named it The Liberty Tree.
The devoted Moffatt-Ladd gardeners ensure the continuance of our Liberty Tree too, and as many saplings as they can establish each year are sold to visitors as a fundraiser, but we seldom know where they end up. I propose that the city of Portsmouth plant one on public land where it can be watched over by all, perhaps near the Liberty Pole in the park. It would be a good way to prepare for her demise. It is nothing short of remarkable that she has survived this long. The day cannot be far off when, like the Anne Frank Tree, our old horse-chestnut will no longer grace the waterfront.
Until then, come and see her. Appreciate her. Touch her if you’d like. You won’t regret it. I will always be grateful that I got to see both of these trees in the glory of their golden years, and that they let me feel a connection to Anne and Prince. I think of them … looking out at a tree that meant something to both of them, something that we can never know. ... Looking out at a tree heralding the passing of one season after another, of time being lost. .... Looking out from the confines of their attic prisons where they could only dream of the liberty we enjoy each day. 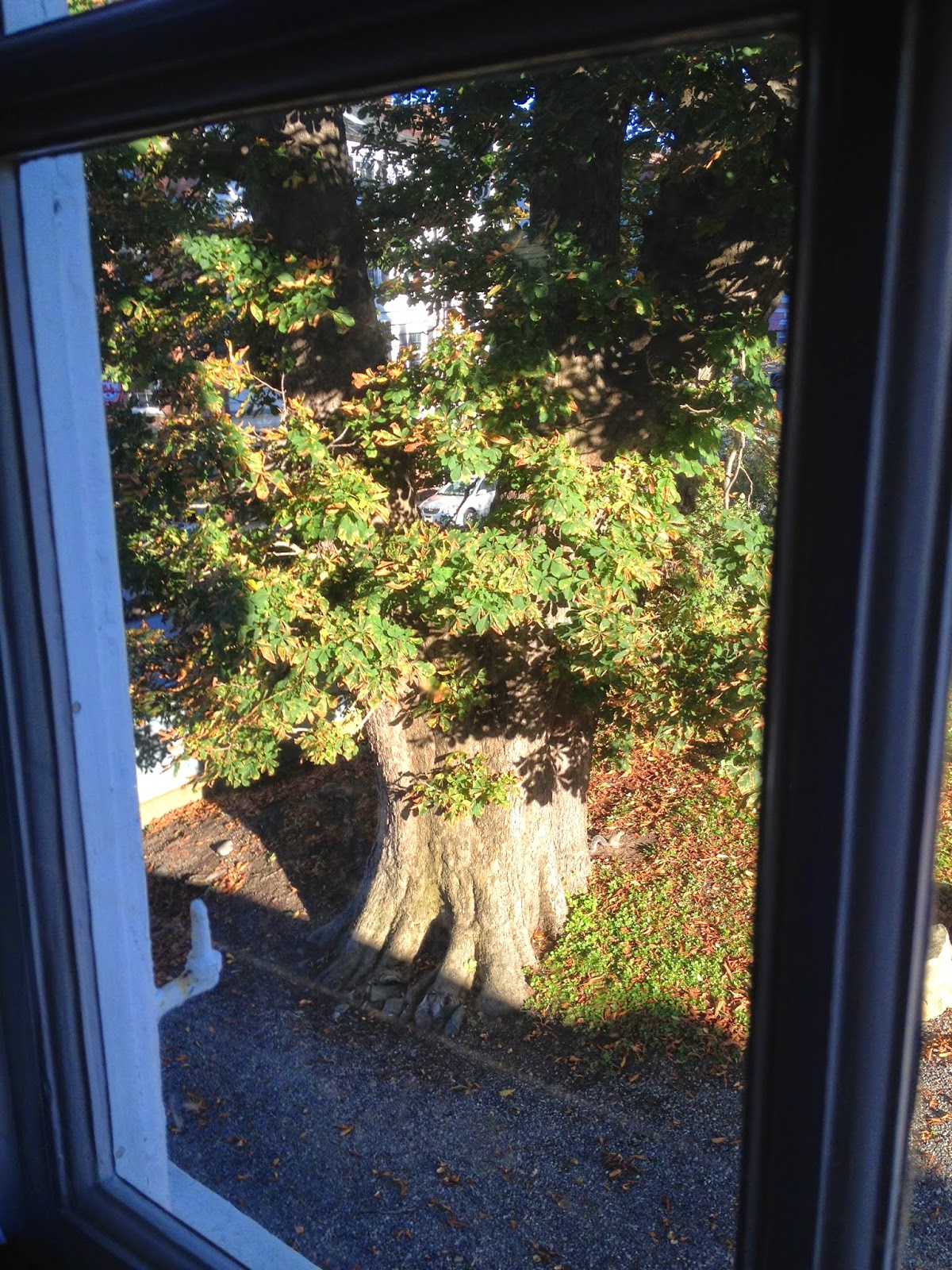 
"From my favorite spot on the floor I look up at the blue sky and the bare chestnut tree, on whose branches little raindrops shine, appearing like silver, and at the seagulls and other birds as they glide on the wind. As long as this exists, and it certainly always will, I know that then there will always be comfort for every sorrow, whatever the circumstances may be."  ~  Anne Frank, February 23, 1944