Did you know that General George Washington conceived of and designed the Purple Heart? He did so in response to the Continental Congress forbidding him to reward soldiers with promotions. Washington was a visionary, that is indisputable. In honor of Memorial Day I have decided to share an excerpt of my novel-in-progress where I have imagined the afternoon in August 1782 when this happened.

He had seen countless men in the most horrific conditions and lowest standard of living, willingly follow his orders, even when the orders had appeared to be a death warrant, - because he asked them to. To walk miles daily leaving bloody footprints in the snow - because he asked them to. To carry on day after day without pay, medicine, and more often than not, nothing more than tree bark to eat - because he asked them to. And he had seen colored soldiers and Native Indians and women and even children do this, sometimes exemplifying themselves as soldiers and patriots of the greatest merit.
And he had seen over his entire life enslaved men and women avoid hard work and sacrifice, showing no interest and what appeared to be no understanding of their reward for doing so, until it became undeniably apparent that a ration of food and shelter, was not reward enough for the human spirit. That of the three; life was the least important to mankind. If liberty and the pursuit of happiness were not also at least distant possibilities, few men would exert themselves at all, and fewer still would exemplify themselves for distinction.
As always when fatigued and weary George thought of Martha, far away on his beautiful farm. He pictured her by the fire silently sewing, using her needle to do good, and he came up with an idea. He lifted his quill and ordered that a new way of recognizing the men would be employed.  He was going to recognize every soldier to start, with a chevron to be worn on the left sleeve of every man that had served for three years with bravery, fidelity and good conduct. After six years another chevron would be awarded. It was a somewhat radical idea and he knew eyebrows would rise and tongues would wag. It made rank irrelevant, shifting the traditional focus from the officer to the common soldier. It would be, distinctly, American.
Further he ordered that a new badge of military merit be designed. It would be sewn of heart shaped purple and gold silk with a narrow lace-worked edging, the word Merit stitched in silver thread was to be surrounded by an entwining laurel on both sides, and he stated his intention as clearly as possible explaining in his order that he was "ever desirous to cherish virtuous ambition in his soldiers, as well as to foster and encourage every species of military merit", and that whenever any singularly meritorious action is performed the badge was to be awarded, and worn on the left breast of the uniform, allowing the bearer to pass all guards and sentinels without question. He declared to the world, "The road to glory in a patriot army and a free country is thus open to all."


With ceremonial pomp previously only afforded to officers Washington himself presented the Purple Heart award to three young soldiers from Connecticut as soon as he could. 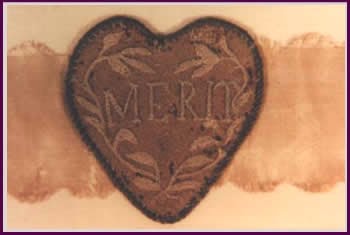 Would love to hear your thoughts.