Tammi and I watched a movie called Lost Boundaries Saturday night. (Well, you have to take a break from writing now and then....)Here is my movie review poem:

The movie Lost Boundaries uses the word Passing
In a context unlike death, at the time of the film
If someone was Passing, they were white not black
In the eyes of their beholders.  They raised families
Who looked white, the secret was treacherous and
Could topple their lives if discovered or spoken.

A great loyalty existed amongst those who knew
The Negros who were passing, it was as if they were clear
They would try to pass, too, if they could, if their
Brown skin was lighter, their hair straighter, their eyes
Colder, their posture more confident, their bulk of
Experiences less crushing, their futures less predetermined.

Such insecurity, such play-acting, such hollow prominence
Such groundless hope, such double lives, such questionable
Aspirations, to live amidst those who would scorn you,
To care for those who would trample you, to reserve such
Truth and intimacy from your blood children, to play
At the white man's unbeatable game, to defeat color itself.

Wrongs heaped on wrongs until no one can do right,
A rite of passage for the children of the Passed parents,
Who missed the window in their growth to bond with their
Black ancestors, who now must suddenly atone for sins
They cannot relate to or understand, their family unable
To help them, their bodies, genetics, appearance all awry.

Cry out now for a merciful blindness to overtake our
Fickle sight, to bless us with the inability to judge on
The basis of anything but obvious merit and selfless actions.
Let us earn our ideas about the human community, apply
The law once recommended by a wiser soul, one who
Believed we do unto others as we would have them do us.

Here is an image of the original movie poster c.1949 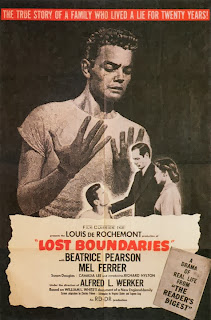