I’d been thinking about him so much in the last few months, had even developed a genuine affection for him that surprised me, and truth be told, I didn’t really want to travel alone. So, since I was en route to his house anyway, and there was an empty seat beside me, I decided to conjure him up. I closed my eyes and asked him to come sit with me a spell. 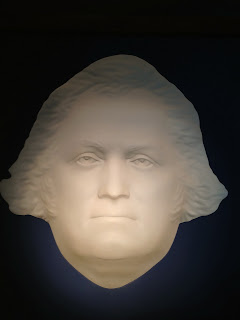 And then … there he was, in all his magnificence, smooshed into a coach seat between me and a young traveler who looked equally befuddled, but kept her reactions to herself, and perhaps her 1472 non-believing Facebook friends. He looked down at his knees, his long muscular legs rammed into the seat in front of him, and he shifted his riding boots slightly. He looked at me. I was agog. He looked remarkably well for the 214 years that had passed since he died an agonizing death. Really – remarkable. His hair was still clean and well-powdered and pulled back into a relatively tidy braid that I knew made my wild traveling tresses look like I might be a zombie. His suit was well-tended right down to the shiny brass buttons. Also quite shiny was the sword dangling from his hip, that I was pretty sure the flight attendant would consider a sharp implement. His mouth was shut tight. I tried to recover from my dorktitude. “Hi,” I said.
“High. Yes, by God, I see we are,” he replied in a soft sort of sexy voice, his gorgeous blues fixed on the window beside me where cumulus clouds wafted by. “Is this conveyance how we ascend to heaven then?”
“Oh, well, no, well yes and no,” I stammered like a fool. “We are flying through the sky, but we are not going to heaven. I’m sorry. We’re going to Baltimore.” 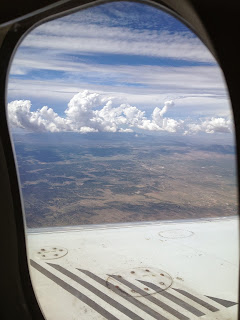 “Baltimore!” he bellowed. “Why the devil would that be? For what cause have I been summoned so? I demand a coherent explanation for this extreme trickery.”
He was upset and I felt bad. While trying to shush him, I said “I’m sorry General. You’re just visiting me in the future. This is the year 2013. We fly around in these airplanes rather routinely now.”
“Air – planes?” he repeated staring hard at me. Then lifting and looking at his big hand, added, “I am an apparition.”
“Yes sir. I just really needed to meet you. You see, I’m writing a book, a work of fiction based on historical facts, that is to say, I’m writing about you. I’m on my way to Mount Vernon now to learn more about your life.”
His countenance changed as if he’d been slapped. His jowls slackened, and his furrowed brow and eyelids lowered. The great bulk of his shoulders caved inward a bit much to the delight of the girl in the aisle seat. “Mount Vernon,” he repeated softly.
“Yes,” I said gaily. “It was saved and preserved as a museum.”
“You’re taking me there – home – to my farm?”
“Wasn’t planning on it Sir. I think there is too much on the ground that would be distressing to you.”
“Well, young lady,” he said politely, covering for both my age and his impatience, “You speak in vexing circles. I must suggest it would benefit us both if you stated your objective forthrightly.”
I, of course, resumed my signature stammering dorktitude. “I guess I just wanted to see you, hear your voice, maybe get your blessing for my work.”
“Desist with guessing. Stand tall with your convictions. If you are being called to write something then do so. If you apply all of the honesty and integrity to your work that you can muster you will be able to withstand any criticism that follows, I assure you. To encourage literature and the study of history is a duty to which every good citizen owes his country.”
“Thanks, I am being honest in my work. I cannot tell a lie,” I teased.
He looked unamused. I got serious.
“I’m writing about you as a slave owner.”
“I see,” he said seriously. “There is plenty of honesty in that. I was a slave owner from the tender age of eleven years until my death, though I provided for my people’s freedom in my will. I knew it to be a withering institution and could foresee it’s undoing in short time.”
Suddenly, I saddened. I didn’t want him to know the truth. I didn’t want to tell him what happened after, though I want to tell everyone else. Children, no matter how old they are, never want to disappoint their fathers. Cannot bear to see the look of failure in their father’s face, reflected back upon us in his eyes.
Averting his gaze, I took his right hand in both of mine. Borrowing his wife’s term of endearment for him, I said, “Yes, Old Man, thank you.”
With his legendary intuitive intelligence, he said just before disintegrating, “Whatever has yet to be done, charge on.”
“Yes sir,” I said to his departing particles, “We will.”
Posted by Tameri T. at 11:54 AM