Degas and the Nude

I was surprised yesterday, albeit pleasantly, at how inspired I was by my visit to the Degas and the Nude exhibit at the Museum of Fine Arts, Boston. Not surprised at being inspired, per se. In fact, I am almost always inspired when I study art, but usually I am inspired to create visual art, or perhaps more precisely I am usually inspired to be a frustrated wannabe. But today while studying Degas I was deeply inspired to write. I thought of two completely disparate writing projects that I want to tackle. Both ekphrastic, inspired by and dependent on his art. The first I'll share with you because I invite you to participate. The second, which will be really fun, I'll keep to myself for now.
I want to curate an anthology of short stories all written in response to a Degas painting titled The Interior, though sometimes called The Rape. I thought it was interesting that many experts have speculated that this painting was itself inspired by a novel (though denied by Degas), and thought it would be a serendipitous full-circle turn to bring it back to the written word again. I was immediately attracted to the idea that everyone who looks upon the dramatic scene he painted will have a different idea of what happened or is happening there, and really believe that it would make an excellent collection of stories.
So ~ if you want to join in the fun, feel free to send me what you come up with. I promise to give it every consideration for the final cut. I'll attach an image of the painting here, but you might want to duck into the MFAB by 2/5/12 to see the real thing and get inspired yourself. 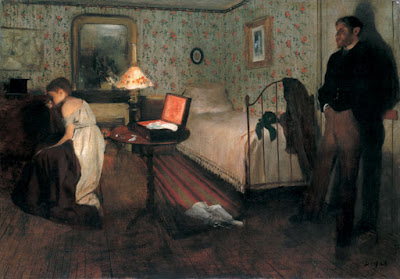 Email ThisBlogThis!Share to TwitterShare to FacebookShare to Pinterest
Labels: Degas, The Interior