Something I wrote recently that didn't make it to print;

Cup ‘a Chowdah?
By Tammi J Truax
“… when that smoking chowder came in, the mystery was delightfully explained. Oh, sweet friends! hearken to me. It was made of small juicy clams, scarcely bigger than hazel nuts, mixed with pounded ship biscuit, and salted pork cut up into little flakes; the whole enriched with butter, and plentifully seasoned with pepper and salt. Our appetites being sharpened by the frosty voyage, and in particular, Queequeg seeing his favourite fishing food before him, and the chowder being surpassingly excellent, we despatched it with great expedition...”
There has been a lot of chat around here lately about chowder. Former-for-a-little-while-governor Sarah Palin tried a bowl at a Seabrook clambake recently. Four thousand less well known people turned out at the 27th Annual Chowder Festival in Prescott Park on June fourth to sample tastes of thirteen different chowders presented by area restaurants who contributed 500 gallons of their very best in a competition that brings tourists from far and wide to eat what we can have every day.
The festival culminates in six awards; first through third place chosen by judges, and the paying people, who never agree on the same three. This seems to be the one truth when it comes to chowder. There is no agreement. Never has been. Never will be.
There is no agreement on the origin of the word chowder. Maybe French. Maybe not.
There is no agreement on the origins of the recipe. Often it is said to have migrated south from Newfoundland, but is also attributed to area Native Americans, sometimes the Micmac. Most likely both are somewhat true as there has probably been a chowder of some sort brewing in the pots of seafaring people all over the world throughout history.
And there is definitely no agreement on what is the best or correct way to prepare chowder. Sometimes there is vehement disagreement. In 1939 a bill was introduced in Maine to outlaw the addition of tomatoes to chowder. Each region of New England, and points beyond, have their own versions, influenced by the ethnicity of the people who settled those regions. The chowder pot is an excellent metaphor for the melting pot.
They did all start out in the same basic way. A pot of water stewed into as a tasty a broth as providence would allow with salty gifts from the sea. To that was added, in layers, hardtack (or sea biscuit), a flour and water cracker that could be stored somewhat safely for months. If possible onion fried in or with pork fat was added.  Onion was the only acceptable vegetable until rather recently.
In New Hampshire the availability of dairy products allowed the addition of milk, cream and butter, and eventually hardtack was replaced with potato. For a century or two no one messed with that basic recipe, but culinary adventurousness and global influence have changed all of that and today’s chowders vary widely from your basic baby clam to saffron scallop chowder. There is not even agreement about if clams or quahogs are best.
Another change is that the fancier the recipe has become the less often we eat it. Chowder used to be a staple of the local diet, both on land and sea. Now it is more likely to be a treat, and with the addition of bacon, butter and cream in copious quantities that is probably just as well. Some of you will remember establishments like Clarence’s Chowder House on Market Street as being favorites for a hearty supper. You can still get a cup of chowder at most local eateries, but it is likely to be an appetizer, and not what you accept as a meal in itself. We are more likely to do so when we make our own, and that isn’t hard to do. Any local fish monger will advise what’s best for chowder today, and may have a pot simmering in the shop. If you are away you can order The Old Salt’s award winning chowder online.
The overall winner this year was The River House Restaurant on Bow Street, a chowder I have enjoyed. The manager attributes their three year reign to the talent of Chef Gerry Walsh, explaining it takes years of perfecting the right blend of herbs and seafood constructed in a particular order for the proper blend of flavors.
When making your own chowder ignore any claims that say it is alright to use clams from a can. Whatever seafood is your preference it should be fresh. Clams should be steamed a bit, maybe potatoes too. Onions should be sautéed with garlic, celery and bacon. Milk or cream should be scalded but not boiled so it is always the last addition. I love to add as many fresh herbs as I can lay my hands on and use sherry or wine. Broth should be very thick, but never lumpy like you would get from a can. Chowder should be served warm, not hot, with an artisan bread and a chardonnay or pale ale. I like to make chowder the day after a back yard clam bake using all of the leftovers in the pot which seems to simplify things while being practical and delicious. Those are my rules. What are yours?
“Chowder for breakfast, and chowder for dinner, and chowder for supper, till you began to look for fish-bones coming through your clothes. The area before the house was paved with clam-shells.”
~ Both quotes from Herman Melville’s 1851 Moby Dick.
2011 Chowder Festival Winners
Judges choice             Peoples choice
1st        The Kitchen                The River House
2nd        The River House         Captain Hutch’s
3rd        Jumpin’ Jay’s              Bob’s Clam Hut 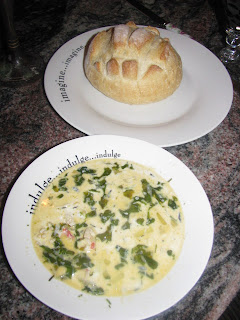 This is superb in its simplicity. Called stew instead of chowder because you mustn’t add vegetables, it really is a chowder. The important distinction regarding chowder is quick cooking time. Soups and stews can be left to simmer for a long time which will ruin any seafood.
Old Fashioned Oyster Stew
2 pints raw shucked local oysters with their liquor
4 tablespoons butter
3 cups milk or half and half
1 shake Tabasco sauce
salt, pepper, and paprika , handful of minced shallots
minced parsley, sliced chives, or sliced green onions
Be careful to avoid overcooking oysters, which causes them to become tough. Drain the oysters, reserving their liquor. In a large heavy pan over medium heat, melt butter. Sauté shallots. Add oysters and simmer very gently for about 2 to 4 minutes. While the oysters are simmering, in a separate saucepan over low heat, slowly heat the milk/cream, and oyster liquor (do not boil). When the oysters are cooked, slowly add the hot milk mixture to the oysters, stirring gently. Season to taste. Remove from heat. Serve in warm bowls and garnish with greens and herbed oyster crackers.
Herbed Oyster Crackers
1 1/2 tablespoons melted butter
1/4 teaspoon dried thyme, crumbled
1/4 teaspoon dried rosemary, chopped fine
1 1/2 cups oyster crackers
Toss together and toast on a cookie sheet at 350 for ten minutes.
###
Posted by Tameri T. at 12:21 PM