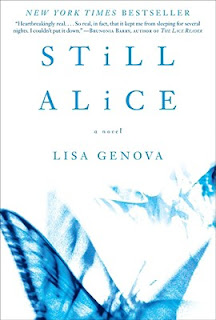 Last night I finished reading Still Alice, a novel by Lisa Genova. It was something I read for the graduate class I just finished called Narrating Illness, which was a writing course taught by a medical doctor at Harvard Extension School. In the course we read and discussed a variety of illness narratives written by well established authors, and each of us work-shopped two of our own over the semester. While Still Alice was not on the required reading list, I chose to read it because of it's subject matter, early onset Alzheimer's disease, and the fact that it was set in Cambridge, sometimes in Harvard Yard.
At first, I was not particularly impressed. It takes a little while for the story's teeth to sink in. But I am left with a big bite mark, an overwhelming feeling of awe for this book. It is a remarkable achievement for a writer. Truly remarkable. That someone could describe, both accurately and eloquently, the unstoppable and terrifying descent into dementia that is Alzheimer's, who has not of course, experienced it, is an example of the consummate skill that every writer aspires to. Lisa Genova nails it. And the progression from beginning of illness to end is brilliantly played out, with a fascinating sub-plot about suicide that was a heart-wrenching stroke of genius. The book is quite obviously a product of intense research but most of the time doesn't come off heavy handed with information, it is well balanced.
Here is a randomly chosen paragraph from the middle of the book, a conversation between Alice, who had been a Harvard professor, and her doctor;

"Okay Alice, can you spell the word water backwards for me?" he asked.
She would have found this question trivial and even insulting six months ago, but today, it was a serious question to be tackled with serious effort. She felt only marginally worried and humiliated by this, not nearly as worried and humiliated as she would've felt six months ago. More and more, she was experiencing a growing distance from her self-awareness. Her sense of Alice- what she knew and understood, what she liked and disliked, how she felt and perceived- was also like a soap bubble, ever higher in the sky and more difficult to identify, with nothing but the thinnest lipid membrane protecting it from popping into thin air."

I read lots of books, and most fall into the dark abyss that is my own memory black hole. Unless there was something there that made the book unforgettable to me. I will remember this book.
Just discovered that the author has a blog where she speaks directly to writers about a variety of subjects, so you might want to check that out; http://www.stillalice.blogspot.com/.
Posted by Tameri T. at 9:43 AM