I went to hear two authors speak this week, and both made strong impressions on me. Especially the first, David Shields, whose most recent book is called Reality Hunger: A Manifesto. His talk was fascinating, quite provactive in the old and noble protest tradition, and I've been thinking about his message all week. He said a lot of things, many of them quite disturbing to much of the highly literate audience, but the major point I took from him is valid, and important. I believe he was saying that we, as writers, are not earning the title of artist anymore, because we are not pushing the envelope the way artists always have, and still do in the other arts. He sees most of us as simply regurgitating the same formulaic crap over and over again while we pander to the publishing powers that be. I have a couple of works in progress that I have been somewhat timid about before hearing his talk, but now I feel strongly that I am going to proceed in executing them exactly the way I envisioned them. Here's an interesting interview with him;
http://www.themillions.com/2010/02/the-millions-interview-david-shields-part-one.html
"When we are not sure, we are alive."
The other author was  home girl, Jodi Picoult. She gave both a great reading and talk. I was most surprised that she left me feeling something I don't usually feel at author events; envy. Inspired me to step up my game.
Here is a list of books by Jodi Picoult. How many have you read? I stil have quite a few to go. She works so fast that she is hard to keep up with!

I noticed that she is not guilty of that which David Shields speaks. This Princeton and Harvard educated best selling author has been snubbed by the literary world in large part because she does push the envelope. She reminds me of my other favorite home girl Grace Metalious. Her well researched topical plots are often ground breaking, but dismissed as pulpy and popular. And she seems to be getting more creative all the time, as evidenced by her venture into comic book writing, (one of the first women to write Wonder Woman) and in her next book which she is releasing with a corresponding music CD. 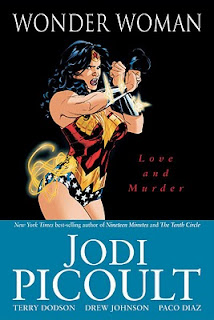 Last night I gave the first public reading from my memoir in progress. It was a nice little coffee shop venue, and I think it went pretty well. But I still want to be Wonder Woman.
Posted by Tameri T. at 8:27 AM